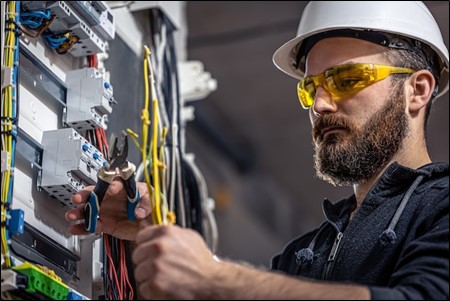 Introduction – An electrical panel, also known as a breaker panel, is a small box with a door that is typically incorporated into a wall in a secluded area of your home. The breaker switches for your home are all found inside. It is possible to turn breakers on and off via switches. They are designed to shut off automatically if excessive electrical current flows through them. There is a standard circuit breaker in the electrical panel that regulates the electricity to the entire house. Additionally, you’ll see separate breakers, each of which is in charge of supplying electricity to a different area of your house. Each circuit breaker should be labeled to indicate the area of the house it controls.

Metal boxes that are usually grey in color are electrical panels. It is common practice to install them into a wall.

There are doors on electrical panels. Behind the door are various wires and switches; the latter are your circuit breakers.

A common location for the panel is behind a bedroom door or immediately inside the apartment itself, near the front door.

When a circuit is overloaded, circuit breakers trip, which causes them to shut off. They are precautions taken to ensure that the home and its electrical systems are safe. If the breaker didn’t trip and cut off the electricity, an overloaded circuit may start a fire or electrocute someone.

One circuit is controlled by each breaker, and each circuit often correlates to rooms or a section of the home. Power-hungry appliances like air conditioners or electric ranges may have their own breaker. If the current through the breaker exceeds the amount it was designed to handle, the breaker will trip. For instance, this can happen if too many gadgets are plugged into one circuit.

Conclusion – Your home’s electricity is supplied via an outside electrical meter, which travels to your electrical box. So, these are some important and interesting facts about an electric panel in your home.